“Positive Thoughts Only.” “No Bad Vibes Here.” “Manifest Your Dreams.” You’ve probably heard these sayings before (most likely on a Typo pencil case, to be honest). Whether you believe in it or not, there’s no denying that the law of attraction is more prevalent in our 21st century society than ever before. In a world that—due to scientific and technological advancement—is becoming less religious, it seems that the new age faith is the belief in the power of the universe and your own thoughts. While positive thoughts are scientifically proven to boost your mood, can simply believing that you’ll become rich really make you a millionaire? Or thinking about that HD grade really make it appear on your transcript?

The term ‘law of attraction’ first appeared in print in 1877 thanks to Helena Blavatsky. The Russian occultist (occultism being the study of practices including: magic, astrology, spiritualism, and religion) was part of a philosophy movement called ‘New Thought’. A branch of this philosophy is the belief that, by focusing on positive or negative thoughts, people can bring positive or negative experiences into their life. But how far can positive thinking go before it’s just called good luck?

With the Greek philosopher Plato noting the phrase, “likes tends towards likes” as early as 391 B.C. and scientists at the Wellcome Trust Centre for Neuroimaging in London discovering those who visualise a better future are more likely to create one, I thought that finding a scientific voice in the community would be commonplace. In all honesty, it was challenging to find someone who was willing to talk to me in depth about their perspective on the topic. I even received one email from a professor of quantum physics suggesting I ask someone in psychology, since physics and the law of attraction do not relate.

In my quest for some sort of scientific backing on this ‘law’, I spoke to Dr Angela Cumberland, an RMIT researcher in psychology, focused on behavior. Although saying once again that the law of attraction isn’t very well known in her field, she did note that “having positive thoughts can be a powerful reinforcer of motivation to achieve what you want. But it’s more the actions taken to achieve a person’s desire that brings results over simply ‘thinking positively’ about it.”

So what about the people who live by the law of attraction? Liz De-Bree is the founder of Irish Angel House, where she works as a medium and angel intuitive. “I believe the law of attraction is very powerful because what we consistently put out into the universe comes back to us. For example, making a vision board and looking at that vision with love everyday. To see it, feel it, and believe it is to make it happen.”

University student Grace McKinnon-Leyton is also a big believer in the practice. “I think believing in it is similar to believing in luck. Visualising where you want to be is so important, as it will help to shape every action you take. Whether that’s self-care, being adventurous, or learning a new skill.”

It seems like there’s still a lot of research needed when it comes down to the scientific and neurological backing that your dream life is simply down to the thoughts that you think. But whether you believe it’s all mumbo-jumbo or a legitimate daily practice, there is something in not only just thinking positively but also applying action to achieve your dreams. So maybe do some actual study while wishing for that HD. 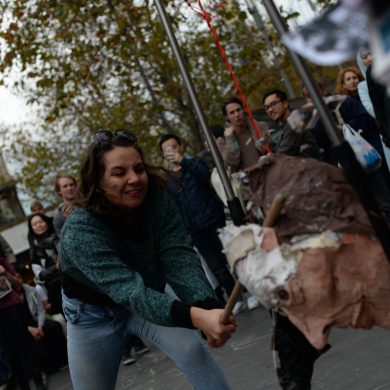