g is premised around simplicity. Firstly, the message has to be simple. Every good campaign is built around a Single-Minded Proposition. It describes what you are promising the consumer when they buy the product. The simpler it is, the better. If you can get it down to one word, eg. ‘speed’, ‘relaxation’ you’re a hero, and you’re creative work will be better for it.

The problematic thing is when you’re confronted with a product and an advertising problem where finding a single-minded solution is difficult. The problem is always complex and there are always a vast number of potential angles. The task of simplifying the problem is hard enough; coming up with an elegant solution even harder.

Steve Jobs was a big fan of simplicity, and he knew that simplicity is hard. In the Steve Jobs biography, Apple designer Jonathan Ive said, “simplicity isn’t just a visual style. It’s not just minimalism or the absence of clutter. It involves digging through the depths of the problem. To be truly simple, you have to go really deep … you have to deeply understand the essence of a product in order to be able to get rid of the parts that are not essential.”

Thinking simply isn’t reductionist. It is much harder than complexity, indeed, the world is usually complex to start with. To come up with a simple solution, you must understand the problem so well that you can boil it down to its essence. Albert Eienstein once said: “If you can’t explain it to a six-year-old, you don’t understand it yourself.”And if you don’t understand it, how can you expect the reader to?

This is even more important in advertising because you are trying to coerce the reader into action. It is essential that they, at a minimum, understand the message. Hopefully the idea itself is persuasive, too.

Once you have a clear idea, the second step is communicating the idea clearly. As I’ve said, these two things come hand in hand: if you don’t understand the problem enough to create a simple solution, you won't be able to communicate the solution simply.

When I walked into my first copywriting lecture this year, the lecturer got straight to the point. “All those big words you’ve ever learned– forget them. Forget long sentences, and for God’s sake, forget poetic language. Copywriting is not about sounding clever, or romantic. It’s about selling an idea.”

She offered us two golden rules:

1. No words longer than two syllables.

2. If you have to look it up in the dictionary, it’s the wrong word

3. The third rule was no puns, but I like to think this rule is debatable.

Every superfluous word is cut, because words like superfluous tend to communicate more about the writer than the message. They clog up effective communication. What’s more; simple to-the-point writing is more readable. This is because there are no big words or confusing sentences to distract the reader from the flow of ideas. Writing creatively is important in advertising, but if you don’t write simply first and foremost, chances are your reader will get lost or bored no matter how creative you’ve been. The essential principle is that if the reader doesn’t understand the message instantly, the advertisment has failed.

These ideas about the power of simplicity had a powerful impression on me. It's made me value simple things, and appreciate the work that goes into making them simple. They are principles that could do with a more liberal application. I find it surprising that the clear communication of ideas isn’t so strongly emphasised in areas like academia. Websites like The Conversation are trying to communicate academic ideas to a broader audience, and that can only be a good thing.

In my experience journalism can also get caught up trying to sound clever, in the process failing to deliver accessible writing.  Simplicity, after all, isn’t about dumbing-down: it’s about clarifying. It would be interesting to see more writers – no matter the field – trying to apply the no more than two-syllables rule to writing. It would be a hard task, but it might be useful one. In fact, a NASA Saturn V rocket geneticist, Theo Sanderson, created The Up-Goer Five Text Editor, asking people to explain complex ideas using  the 10,000 most used words in the English language. You can give it a go here.

If nothing else, trying to write simply is a good way of testing how well you know what you’re talking about. When I’m writing an essay and struggling I can be sure that I don’t understand the content. For every long-winded, clever sounding sentence I know there’s a short, simple one that says it better. And when I find simple words to say complex ideas, things crystallise. I understand the ideas better. And when I do, I can be sure the reader will understand them better.

It’s harder to write less then it is to write more, but it’s worth the struggle. The maxim holds. Less is more. 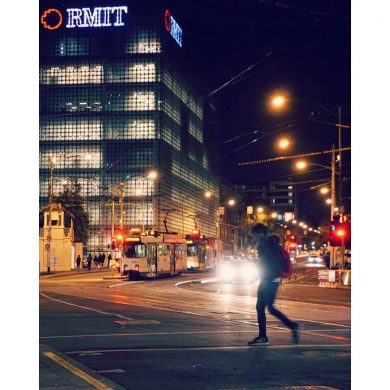 Emissions go down as water usage increases at RMIT