I was just eleven, when I became a soldier

Bullets in my hand, and a gun on my shoulder

While the opening lyrics of Flybz’s song ‘Child Soldier’ echo the dark and bloody experiences of the two young rappers, their message is ultimately one of hope.

After escaping a genocidal regime in Africa, Fablice Manirakiza, 21, and Irahiza ‘G-Storm’ Jeanchrisostome, 18, have built a new life in Melbourne in the hip hop music scene. Their experiences service as the basis for many of their lyrics. When Fablice was just eight years old, he watched as his parents were murdered. Three years later, government forces took him and turned him into a child soldier.

G-Storm’s past is entwined with Fablice’s. By blood, they are uncle and nephew though Fablice is only three years older. The pair spent their childhood in war-torn Africa. As children, the pair were helplessly swept along in a wave of violent events that started in the lead up to the Rwandan Genocide, which saw its 20th anniversary this year. The violence not only took the lives of many but it ripped away the innocence children like Fablice and G-Storm were entitled to.

It’s a world away from their current circumstances. After arriving in Australia in 2007, the two young men experimented with hip hop music as a way to express themselves. In recent years, Flybz have performed around Melbourne and interstate and they’ve caught the eye of some of Australia’s most iconic musicians, including Paul Kelly who featured on their debut track.

The story of Flybz is long and complicated, but so worthwhile the pair often speak to high school classes about their past. A history lesson with a difference.

“Been to hell and back”

The Belgians came to Ruana-Urundi (now respectively Rwanda and Burundi) and found two groups, the Hutu majority and the Tutsis, who comprised 15 per cent of the population.

They regarded them as different ethnicities, introducing ID cards in the 1920s to show which tribe one belonged to. They used the Tutsis in administrative positions, hoisting them as superior to the Hutu and long after the Belgians had given up their Imperialistic dreams, that belief of Tutsi superiority lingered. The hatred between the two groups was perceived as ancient. Violence would frequently break out between the Hutu and Tutsis.

In 1993, in neighbouring Burundi, a year before the Rwandan Genocide, the Burundians voted in a man named Melchior Ndadaye. He was Hutu and quickly appointed a Tutsi as an economist in his cabinet to quell any ideas of a Hutu-centric Parliament. In October that year, Ndadye was taken by Tutsis inside the Burundian military and murdered, along with three other members of his staff. His death triggered mass killings, with 150,000 dying and 300,000 Hutu fleeing the country, some to neighbouring Rwanda.

Among them was Fablice Manirakiza (barely a toddler) and his family. His mother was a Hutu, and his father, a Tutsi.

“Many Burundians lost their lives,” said Fablice. “Whoever could, ran away.
“So we became refugees in Rwanda for a couple of months, and then it didn’t take long until Rwanda was in action as well.”

On April 6, 1994, unknown forces shot down the plane of the Rwandan President, Juvénal Habyarimana (a man who took the presidency by throwing the previous incumbent in prison to starve to death). Rwanda was bankrupt, and despite having enjoyed some economic prosperity with a healthy GDP in the ‘60s, the country was now poor and overcome with refugees. The violence in Burundi only convinced Rwandan Hutus that Tutsis sought to totally control Hutus in Africa. They began importing machetes and small arms into the country, hiding them in townships across Rwanda.

When Habyarimana’s plane crashed, killing everyone on board, Hutu military leaders took control and began the genocide of all Tutsis and any Hutu moderates across the country. The New York Times called it an “uncontrollable spasm of lawlessness and terror”. But like the Holocaust, the Rwandan Genocide had actually been carefully planned and meticulously coordinated.

“In less than a month, one million people [had] died,” said Fablice. His father, a Tutsi, was an instant target. So was his mother, a Hutu, who was an accomplice for loving a Tutsi man. The family fled back into Burundi despite the violence there and worked hard to get “back on track”.

However, when Fablice was eight years old, they were both murdered for the reasons mentioned above. “I was there,” he said. “You just want to forget about it sometimes. I wish that it never happened.” As an orphan he found shelter and he began schooling for a few years, until he was taken by government forces when he was eleven. Burundi was in a state of turmoil, made worse by chaos in its political circuit. “They came into the school and [said], ‘Tall boys. Let’s go.” Fablice was dragged into a truck to become a child soldier. He was ten.

“The Devil had his way”

Child Soldiers International, a UK-based NGO, estimated during the 2000 – 2005 period, there were approximately 2500 child soldiers active in the Burundian government’s military.

Child soldiers are a common way for armed groups to boost and replenish their ranks. They are easily brainwashed and naturally, as Fablice points out, have a lot of energy. Orphans, like Fablice, are even better because no one comes looking for them.

Liberia’s warlord-cum-president Charles Taylor had been using them to fight off LURD rebels on the other side of Africa. And the Tamils grabbed orphans from refugee camps in the wake of the 2004 tsunami in Sri Lanka to help replenish their ranks. The Burundian military would deprive Fablice and other boys his age of sleep and feed them drugs to get them addicted.

Fablice managed to escape after a while and lived with his sister in Burundi. He was still addicted to drugs and would struggle to come off them long after escaping his tormentors. He continued to do things like sniff petrol as a way to cope with his experiences. He would soon join his other older sister, also a former-child soldier. She had been raped by her cousin in a refugee camp and had given birth to Fablice’s nephew, Irahiza Jeanchrisostome, at 17 in a refugee camp in Tanzania.

When he was seven, Jeanchrisostome  – who went by the name G-Storm – would secretly escape the camp (it was illegal to leave) and steal food from nearby homes. He would also sell marijuana to local police until he was eleven, using the money he made to buy food. “You needed to become friends with the police,” he said. “Because if you were friends with police it would be hard for you to get in trouble.”

“Of a life with no childhood”

At times, G-Storm’s mother would be arrested on false charges by police, who had been tipped off by people inside the camp with an agenda. Other times she would return to Burundi or visit other refugee camps.

One of the camp’s unspoken rules was that children were under the care of all the parents there, so it wasn’t necessarily a bad thing that G-Storm’s mother left. But he wouldn’t always get along with his ‘foster’ parents. At one point, G-Storm spent two weeks sleeping in a tree outside the camp waiting for his mother to return, eating rats and mud to stave off hunger. “I was my own father and my own mother at the same time,” he said.

The family’s luck started to change in 2007. In late August, G-Storm’s mother attended a meeting with UN immigration officials at a refugee camp. “It’s probably the one day that I will never forget in my life,” he said. The officials had given the family a green light, thanks to his mother’s strong lobbying, and would soon find them a country to settle in.

The family had to walk back to their own refugee camp along a road that cut through the jungle and was renowned to be dangerous. There were stories of bandits robbing and killing people on the road, taking their heads and then later selling them. It started to rain heavily on the way back, and G-Storm’s mother had started to lag behind after talking to a friend. He waved his family on and decided to wait for her.

G-Storm knew he wouldn’t be able to protect his mother, but figured if it was someone he sold drugs too they may decide to leave the two alone. No one came, they walked back safely but to G-Storm, as the rain started, it seemed like a sign.

“I found freedom in the land down under”

The next month, the family immigrated to Australia.

“On the way when we were coming here, they told us how to say ‘No English’,” said G-Storm.

Both were extremely interested in rap. G-Storm found it a way to express himself, especially regarding his relationship with his real father. “I feel music is someone I can talk to whenever I have problems,” he said. When he was six he had won an award at school in the camp for a rap he performed in Swahili.

In Australia, Fablice saw some of G-Storm’s work and said he liked it, but it needed some work. They decided to work together as Flybz. If they were going to rap in Australia they would have to learn English, so they did, and fast. They listened to music, watched cartoons and read kids books. You wouldn’t be able to tell if you had spoken to them when they first arrived they would have just said, “no English”. Rap is a way of channelling what they’ve been through and it’s one of the most important things in their lives. Fablice studies International Business at RMIT and the pair were recently the subject of an ABC documentary.

Hardened by their experiences, nothing really upsets them.

“You just learn to forgive people,” Fablice said and quoted Nietzsche, “what doesn’t kill you, makes you stronger”.

“For me, the things I’ve passed through in my life. It’s too hard to get mad,” said G-Storm.

The two are set on living good lives now and their music is all about moving people. As Paul Kelly sings in Child Soldier, the pair have “seen hell itself” and are now crafting a much sweeter life for themselves in Australia. 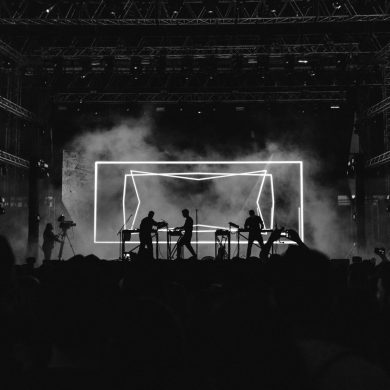