Born in Korea, made in Australia

Ashlee Wardrope was born in South Korea. She spent the first few months of her life living in a foster home before being adopted by an Australian couple through the Eastern Child Welfare Society. Today Wardrope considers herself to be Australian in all things – manner, speech and outlook.

When asked about her early childhood and entire adoption process, Wardrope says she can only go on what she’s been told by her father and what’s written in her adoption papers.  “I don’t remember anything at all,” she says.

For many children, living in foster care and orphanages around the world, their early years are summated entirely in their adoption papers. In Wardrope’s case, her parents gave her all of her adoption papers which details the names, ages and occupations of her birth mother and father, as well as the province in which they resided.

“What actually happened was, I believe that my mum, she was about 22 and my father was in his mid 40s… this is just a guess, but I think that [my adoption] has something to do with that fact that they may have been having an affair… and during that time I guess it was quite disrespectful to have a child out of wedlock of some sort,” she says.

There are many children like Wardrope who are adopted into Australian families, yet actually have no understanding about where exactly they were born or why they were given up for adoption.

“Poverty and inequality are [among] the key drivers for inter-country adoption”, UNICEF Chief Technical Advisor Amy Lamoin says. “Inter-country adoption is a last resort where children cannot be raised in a family environment, or alternative care in their own state.”

Inter-country adoption emerged in Australia during the 1970s, following the Vietnam War. Designed primarily to provide young children, living in underdeveloped nations, with greater opportunities and a more stable lifestyle, it a process which has and continues to be criticised and critiqued.

I guess – as a nation – we have to ask ourselves what kinds of expectations we are placing and enforcing upon children and their adoptive families, particularly when it comes to trying to ensure a child’s transition into a new family and cultural environment is as smooth as possible.

“Adoption in Australia is about the child”, says Dr Patricia Fronek, senior lecturer in the School of Human Services and Social work at Griffith University.

“It’s not about creating families or finding children for families. It’s about finding families for children,” she says.

Perhaps this is where we hit our first roadblock with regards to bestowing unrealistic expectations upon families and adoptees.

Abbott’s been “putting families first and stating that adoption is about making it quicker and easier for people to adopt children which is the opposite of what it should be,” Fronek says.

“This has undesirable consequences and places the well-being of children in the realm of a market commodity, particularly given the privatization of the agenda,” she says.

Inter-country adoption should be considered much more than a mere business transaction. Whatever words we use to describe people and processes can in turn create perceptions that concurrently create realities and attitudes towards those people and those processes. They simultaneously create quixotic expectations.

Firstly there is the expectation that a child will effortlessly slot into a family. This stands in contrast to the dominant reality. What is actually needed is for a family to veritably mould their everyday lives around the child’s needs.

“The word shop in this context is offensive to people in the adoptive community,” Fronek says. It all comes back to this imperative concept: adoptees are not commodities.

The intention of the adopting family should be succinct; to enable a child to grow up in a stable and loving environment free from poverty and provide them with greater opportunities in areas such as education, health and welfare. The entire process can be extremely rewarding and beneficial for the adopted family as well as the family adopting.

“I had previously been in a foster home… so I was living with this other family and my father went over there [to South Korea] and met the family and everything… and then brought me back over to Australia and yeah it’s actually been pretty good,” says Wardrope.

From here we can segway into the next expectation, often associated – or at least to me it was – with inter-country adoption; children from all different walks of life, no matter their country of origin, can be adopted into Australia. Cue the alarm bells. This is not the case.

As it stands, children not born in a country belonging to the Hague Convention are not and – according to both Fronek and Lamoin – should not be eligible for adoption in Australia. “The Hague Convention of adoption basically sets down the absolute minimum standard for the practice of intercountry adoption and anything less than that is a problem,” Fronek says. “It increases the risk of trafficking and other practices particularly when it comes to relinquishments.”

Last year we saw the Federal Government introduce the Australian Citizenship amendment bill. According to Fronek, this bill guarantees less protection for children in Australian legislation. Why? Fronek argues the bill is about putting non-Hague countries on the same footing as Hague countries.

“Non-Hague countries are not [party] to the Convention, because the minimum standard of ensuring the children’s interests are protected, are not met,” she says.

Fronek argues today, many new countries signing the convention don’t have practices which are above board and accountable. “I think that’s the case in many of the countries that Mr. Abbott’s nominated,” she says.

There is an ethical debate which often dominates discussion surrounding intercountry adoption. It stems from the argument that taking orphaned children from their birth countries leaves adoptees with a fractured ethnic identity.

Fronek believes it’s extremely important that aspects of a child’s country of origin are incorporated into their new life in Australia.

“It doesn’t matter how positive the adoption is, intercountry adoptees do struggle with identity,” she says. “When adoptees eventually return to their country of birth or find their families, cultural misunderstandings can be really common.”

Fronek sees returning regularly to a child’s country of birth as being really important as well as parents actually learning and using their child’s language. The other important thing she points out is the act of introducing people into the family’s social circle who are from their child’s home country.

In contrast sits Wardrope, who says her parents didn’t incorporate South-Korean culture into her home life in Australia.

“I was just brought up in a full Australian family. None of the Korean culture was brought over at all,” she says. “I don’t have any plans as such to go back there [to South Korea] or to find my birth parents as such.”

To Wardrope, the thought of going back to South Korea is no different to how she feels about travelling anywhere else in the world. She suspects she would see herself as similar to any other tourist visiting the area.  And finally, we find ourselves at the final expectation, one I hadn’t particularly thought about but rather one Wardrope actually brought to my attention.

Despite spending all but five months of her life in Australia, Ashlee has found herself to be miss-identified with regards to her ethnicity.

“I’ve been over to South-East Asia before and I guess going over there I had the same expectations as in I’d be treated like a foreigner, but there were times when I wasn’t around my Australian friends so sometimes I found that people would actually try to talk to me in Thai or Chinese or something like that,” she recounts.

“That kind of shocked me and I was wondering why they were trying to converse with me but then I would remember that I probably looked just like them.”

Intercountry adoption – particularly with regards to Ashlee’s story – therefore manifests how citizenry is not always dependent on race and cannot be assumed by a person’s physical appearance. We should correct such expectations and instead assume that the process of intercountry adoption and the kinds of cultures an adoptee experiences in Australia cannot be deduced to a sheer, coherent set of expectations. 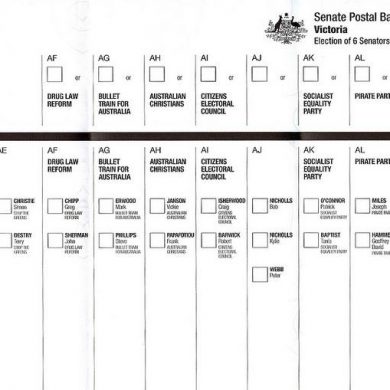 No Sauce Required: How to Survive the Election Apocalypse