‘Hello Earth, This is Space Calling’

Four hundred kilometres up, Space Stations are worlds of their own. Dipping in and out of the atmosphere, they are the furthest humanity has slipped from the Earth’s embrace since we last went to the moon.

They are huge hunks of metal held together with complex wires, circuits and computers. To get up there takes technical expertise beyond imagination. But to talk with it? All you need is a hand-held radio and a license.

Jack Bramham has one such radio. It’s no larger than a normal walkie-talkie, albeit with a twenty-centimetre antenna, but with it he spoke to the Russian MIR station back in the 90s.

Bramham, who is known on air by the call-sign VK3WWW, has been interested in amateur radio (also known as ham radio) since he was knee high to a grasshopper. He had his interest piqued in tracking “the stuff up there” shortly after joining the Melbourne Electronics and Radio Club.

He heard through the grapevine it was possible to track and radio the Russian MIR Space Station, which was hosting Australian astronaut Andy Thomas.

“So I listened in one night and thought ‘I’m going to try this out!’,” he said.

You get about eight or ten minutes with a station as it whizzes between horizons. So the next night, Bramham fired up his radio and – to put it incredibly simplistically – phoned space.

So what do you ask someone hurtling through the upper reaches of the atmosphere at a million miles an hour?

“He asked me what the weather was like where I am, where I live, what I do. I asked what it was like living in space.”

That wasn’t Bramham’s only contact, however. He later learned Thomas was homesick, being on a Russian space station with Russian cosmonauts and a slipperier grasp on his Cyrillic alphabet than ideal.

“Talking to someone in the same language with the same lingo was really nice for him,” he reminisces.

However, one Australian regularly provided Russian cosmonauts a glimpse over the Iron Curtain in the early 90s. Maggie Laquinto was a ham radio enthusiast and teacher from Colac who regularly spoke to the MIR crew.

Laquinto, who was known as VK3CFI, spoke Russian, and taught cosmonauts the basics of ham radio, as well as telling them about living in the west; about things they weren’t taught in Russia.

“You thought the great firewall was tough, the Iron Curtain was a hundred times worse,” she says in a speech posted online (Laquinto sadly passed away a few years ago).

“The cultural difference was immense.”

Maggie recounts the most poignant difference in her brilliant Russian accent.

For Bramham, the days of breaking down geopolitical rifts are over. These days, he helps kids speak to the ISS as part of ARISS, or Amateur Radio on the International Space Station.

Schools reach out to ARISS to get students to ask questions of astronauts. On top of the usual ‘what’s it like in space?’ and ‘how do you go to the toilet in space?’, Bramham says he’s had some pearlers.

“One kid got up and asked, ‘if there’s a legal issue in space do you guys have like a space law to decide who did something wrong?’ I’d never thought of that before.”

Bramham says he loves it.

“Every school who does it says this is the best thing their school has ever done.” 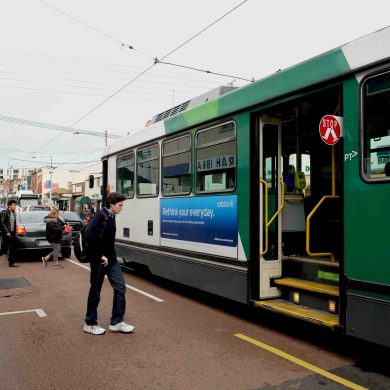 The Sustainable Urbanist: Doomed for a Slow Ride?