I’m terrified of writing this article.

The thought of death and being dead, with no consciousness, scares the living shit out of me (pun intended).

For a long time I thought everyone felt the same. Surely everyone thinks about their own mortality as intensely as I do? But whenever I told anyone about my fear, I was met with “why? It happens to everyone and there’s nothing you can do about it” and “yeah, but like, everyone is scared of death.”

I soon realised that not everyone is as scared as I am.

Death is just one of those things we don’t talk about. It’s always lingering in our subconscious but rarely does it come up in conversation.

Irvin Yalom discusses the topic in is his book Staring At The Sun – Overcoming the Terror of Death. His main argument is most western cultures do not promote an awareness of death, and therefore it is something we come to naturally fear.

And I mean, it would be a difficult thought to constantly entertain. Clinical psychologist Dr Jacqueline Baulch is the director of Inner Melbourne Clinical Psychology, and says as a society we’ve become very good at coping with the thought of death. “We’ve figured out a way to push out the fact we’re going to die, so we can continue with the business of living,” she says.

Somehow I missed that memo. Because I think about it a lot.

For me, it’s not the actual dying part, the pain, or the process of slipping into death. It’s the being dead part, the unknown. It’s the ‘I will never see, feel or experience anything ever again and it’s all dark and empty and wtf, omg I’m having an panic attack’.

After some brief Internet research not long ago, I diagnosed myself with Thanatophobia, “the extreme and often irrational thought or fear of death”.

Phobias are clinically known as being an excessive or unreasonable fear directed towards a particular object, situation or event causing significant distress or interferes with everyday functioning.

However, to me, the ‘phobia’ of death doesn’t seem unreasonable. And it doesn’t necessarily affect my everyday functioning, just occasional sleep-time-functioning.

Dr Baulch says things do get a bit confusing when dealing with the fear of death, and most psychologists classify it as a fear and not a phobia. “It’s not like a phobia of heights or snakes, it’s much more complex than that,” she says. “There’s nothing irrational about fearing death.”

So how does the fear turn into actual anxiety? Dr Baulch says, “Anxiety feeds on uncertainty, and the inability or difficulty tolerating uncertainty.”
Death is the ultimate uncertainty.

I’m not 100% sure where my fear came from. My grandma thinks it has something to do with my grandpa dying in a car accident when I was three. “You were best-friends,” she says. “Absolutely inseparable. And then all of a sudden he disappeared, you didn’t understand where your friend went.”

In Staring At The Sun Yalom says, “for some people ‘death anxiety’ is the background music of life… For other people, the anxiety is louder, unruly and tends to erupt at three in the morning.”

For me it erupted when I was about 11-years-old. We had just moved to America for several months for my parent’s work. My days would go from listening to my precious Kelly Clarkson CD repeatedly on my Walkman, to crippling panic at night.

I would lie awake, slowly getting myself into a black hole of thought… What happens when I die? Will I never see my family and friends again? Does it just END?? And like with any panic attack, my body rushed with an intense amount of adrenaline and I would run to my parent’s room, “Mum! Mum! We’re all going to die!”

I’ve continued to struggle with the fear my whole life, but of course I no longer run into my parents room when I have the anxiety.

It has only been through being open about my own fear that I have ever met anyone else who felt the same. Last year I met Rhys Kennedy, who I later discovered had the shared experience of panic attacks about death since a young age.

“I’m scared of not being here. When your body and mind are not here anymore,” says Rhys. “Generally I start thinking about it before bed. I get this huge burst of panic and adrenaline and I have to get out of the darkness to try to calm down.”

Dr Baulch says it is not uncommon for people to experience this fear when trying to sleep. “There are similarities between falling asleep and dying, in that you go from being conscious to unconscious, so in many ways falling asleep parallels death.”

How does this fear develop? Dr Baulch says it differs greatly from person to person. “It can come up in the context of trauma, experiencing the death of a loved one, almost dying yourself or having an illness that threatens your life,” she says. On the flip side, “some people will be exposed to death and have no fear of death afterward.”

In defence of Valentine’s Day

When it comes to treatment for death anxiety, Dr Baulch says seeing a psychologist and working through where the fear came from – and facing it head on – can help diminish anxiety. Yalom also suggests, “truly facing one’s death with full conscious thought” to overcome thanatophobia.

Dr Baulch says it doesn’t help we often talk about death in a really deluded way, “we all have these things we tell ourselves about death to make us feel better, like ‘only the good die young’ and ‘they’re in a better place now’.” She says fearing death is probably much more common than we realise.

I can’t say this article has cured my fear, but it’s certainly helped me understand it. And it’s made me wonder, would everyone be a whole lot less terrified if we spoke about it more?

Perhaps we all need to stare into the sun, and it’d be a bit less horrible if we did it together.

If this has raised any issues for you, please call 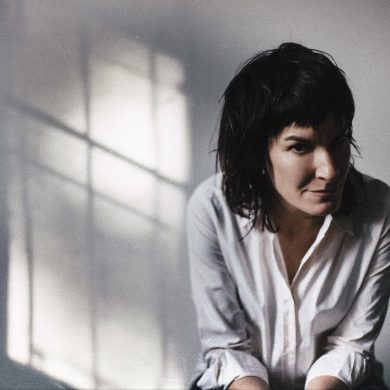 Jen Cloher on her self-titled album, Courtney Barnett, and being a musician in Australia